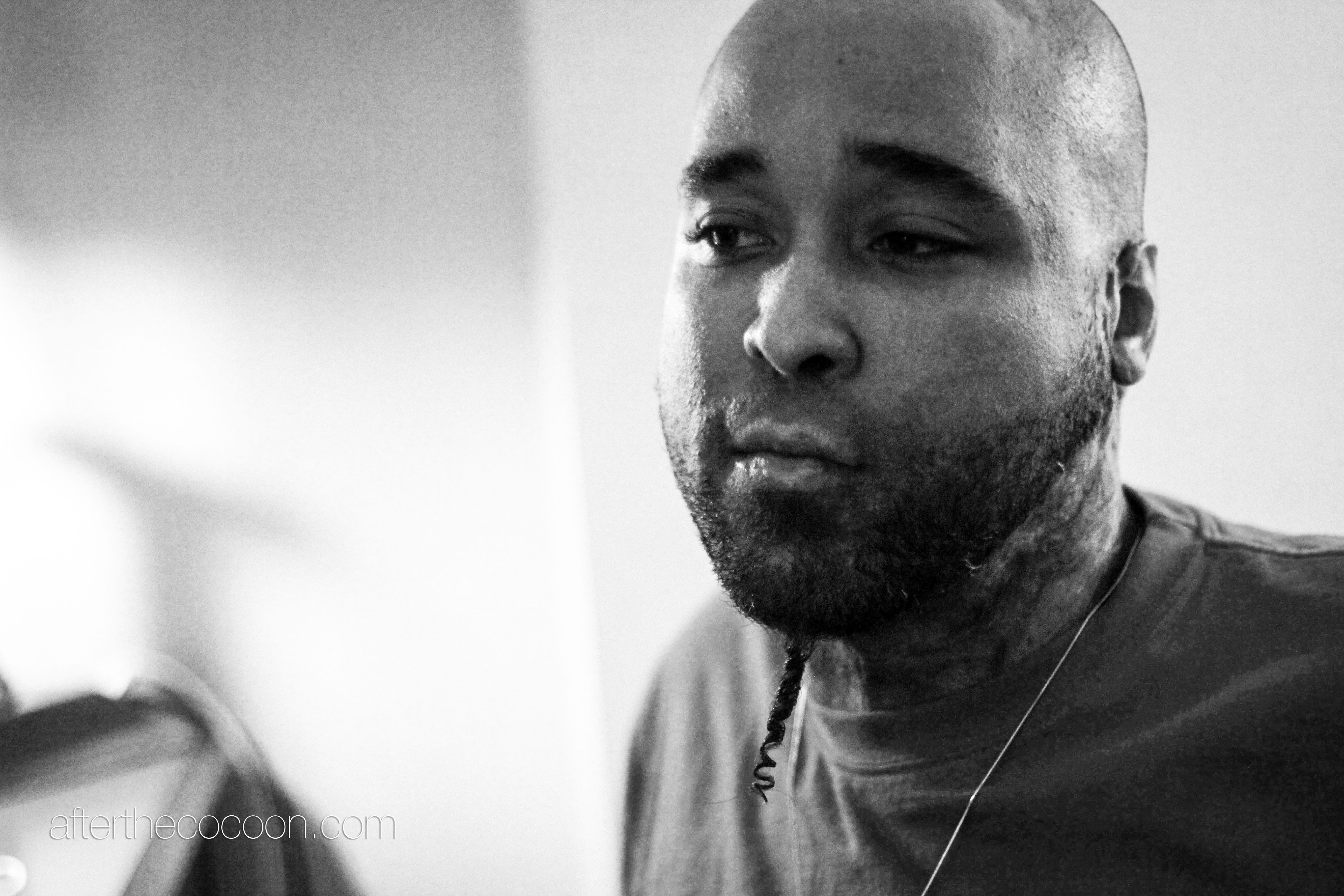 Darryl Parsons will never forget the date of his burn accident – his 26th birthday.

Darryl celebrated by going to a party that one of his friends hosted at a campground just outside their hometown in Lower Sackville. It was a typical gathering with drinks, food and barbecue. Throughout the party, people were pouring gas into the fire to make it bigger, but towards the end of the night it was almost dead. Darryl didn’t think twice about sitting by it. However, when some strangers came by their campsite, and got one of the girls from the party to come by their area, there were some concerns. Because everyone was preoccupied with trying to get her to come back, no one noticed that one of the people at the party threw a can of gas into the fire.

In a split second the container exploded towards Darryl and the flames came at him like a fireball.

Darryl jumped back and stood up. He thought he was able to dodge the flames, but his friends screamed that the fire wasn’t out. He immediately stopped, dropped, and rolled. Darryl had only seen that his arms were engulfed in the flames and didn’t realize the fire went onto his shirt and neck. His friends extinguished the rest of the fire by beating it out with a jacket. They helped him take off the burnt t-shift while they waited for an ambulance to arrive. Although everyone was in a panic around him, Darryl remained calm.

Darryl was in hospital for three and a half weeks and was in shock. For a long time he didn’t want to process what had happened. While he was there, Darryl felt isolated and alone and wondered what was going to happen after he was released. However, during his recovering he was visited by Debbie Ward, president of the Nova Scotia Burn Support Group. If he hadn’t met her, Darryl doesn’t know what kind of person he would’ve become.

Debbie, who is also a burn survivor, told him about the resources available through the support group, such as a burn camp where burn survivors come together for a retreat. Three months after his burn injury, Darryl went to one of the camps, which was an emotional eye-opener. He had never met another burned person before his injury and initially felt worse going to the camp. He didn’t think he was burned enough compared to the others and wondered why he was there. However, Debbie reassured him that it didn’t matter how much someone was burned, but how they felt.

While the camp helped him, Darryl struggled with other issues, including the fact that he was a hidden burn, which meant he could cover his burns if he wanted. He felt terrible because he thought he looked like he was ashamed of what happened, whereas other burned people were more visible. He also felt alienated by his friends because they moved on faster than he expected they would. Even though he may not have been ready, Darryl pushed himself psychologically to deal with these problems and kept telling himself he would be okay while he was recovering. The burn support group also continued to help him a lot and he realized that he didn’t have to be alone with his struggles.

Darryl feels like his burn accident is a double-edged sword. Initially, he felt mentally destroyed by what had happened, but he realized it was an opportunity to start over and become the person he wanted to be – but through a way he didn’t expect.

Before his accident, Darryl was an avid fan of piercings and had an earring, both his nipples and tongue pierced. However, the hospital removed almost all his piercings. He can put back those piercings, but Darryl feels this would be going backwards because he associates them with his old identity.

Darryl’s burns on his neck 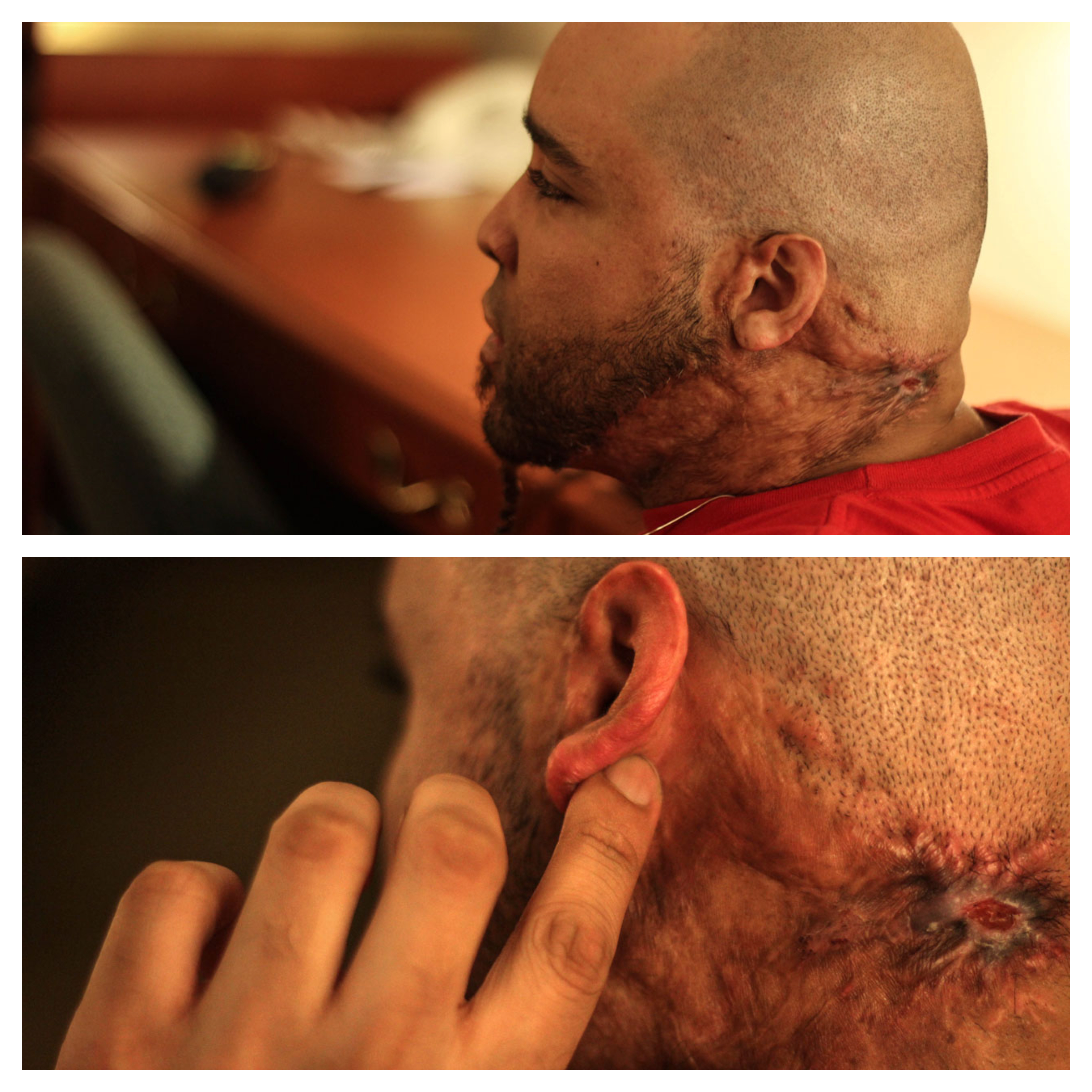 Darryl’s tattoo after his accident 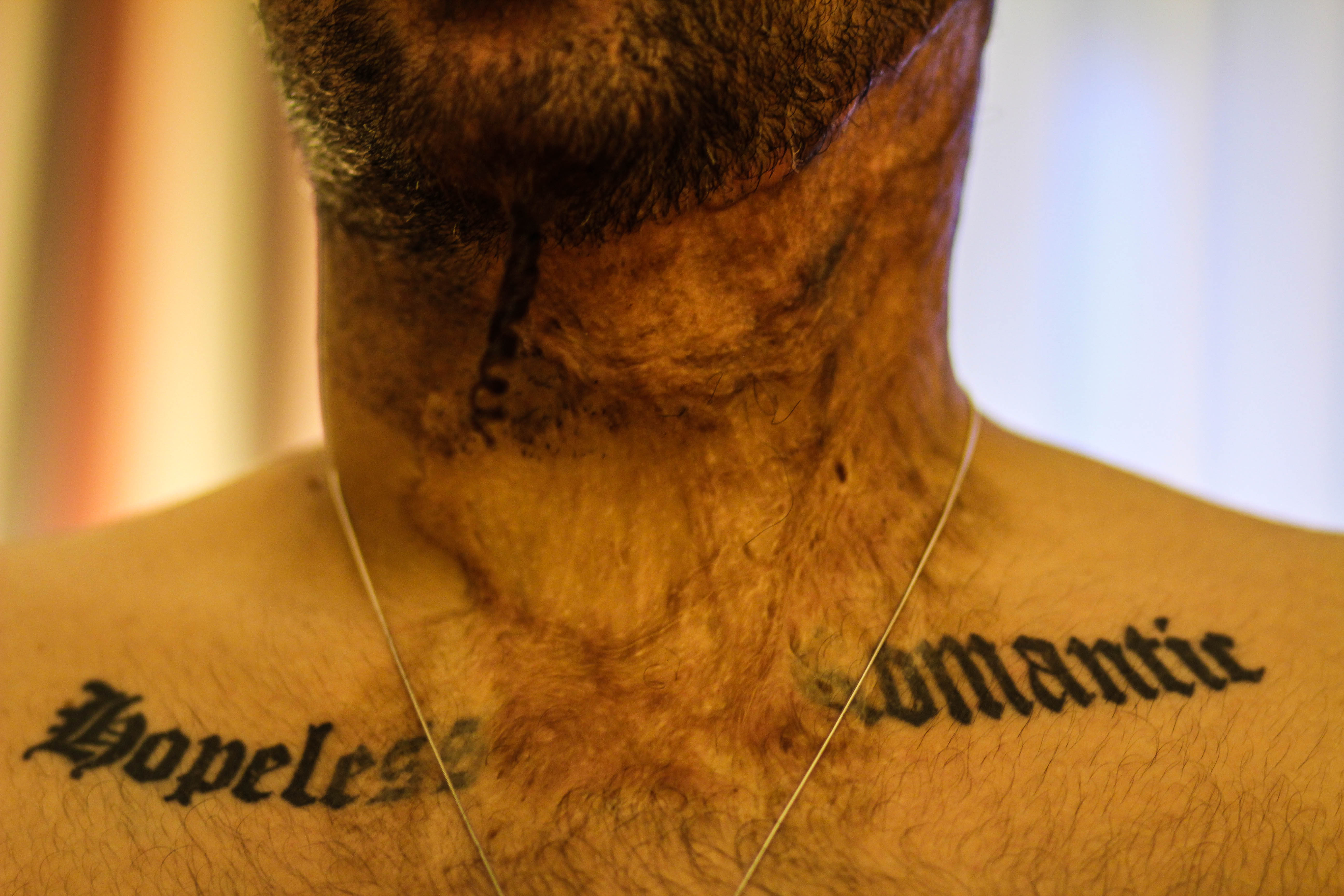 Darryl also has mixed emotions about his birthday because of the accident’s timing. At first he felt cheated because other burn survivors talked about how their burn date was their new birthday. However, Darryl now tries to associate positive feelings about his accident happening on his birthday as an opportunity to continue on with his life. Darryl knows he will continue to have good and bad days, but now feels like he’s at the front door of the rest of his life as a burn survivor.

Darryl Parsons lives in Lower Sackville, NS and serves as the vice-president of the Nova Scotia Burn Support Group.